The history of the Department of Electrochemical Productions Technology 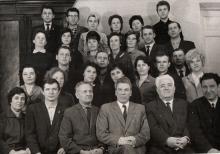 The Department of Electrochemical Productions Technology was founded in 1929 and was headed by M.O. Rabinovich, who started development of methodical programs, lections, textbooks and founded the bases department’s scientific work. The first academic group consisted of 6 persons and was formed from students who previously studied the technology of inorganic substances.

In 1930-1941 y. and 1944-1956 years the department was headed by well-known specialist in the field of electrochemistry M.М.Voronin, who had great experience in industry and was known to be the author of numerous original products of new technological processes and electrochemical control methods in industry. During The Second World War the department continued it’s work in Tashkent, where KPI was evacuated.When KPI was returned back to Kiev, the department’s staff, which was mainly formed from department’s graduators, paid large attention to the creation of the methodical and scientific literature and the organization of research work with the involvement of the students. Scientific products of the department in that period in the field of electroplating, sodium chloride electrolyses, lead power sources production were widely applied in industry. In 1949-1954 years three books in electroplating were published, the textbook in design and calculation of electroplating bathes was written by the head of the department. .

56-1960 years the department was headed by associate professor І.B.Barmashenko, who also headed the department during the evacuation of the KPI in 1941-1944 years. І.B. Barmashenko developed scientific trends, proposred by Voronin, leaded the researches in the field of power sources improvement .

Further development of the department and it’s establishment as one of the world famous electrochemical schools is connected with the name of famous scientist, science organization and pedagogue, doctor of chemistry L.I. Antropov, who headed the department of EPT since 1960 t 1986 years. During this period the laboratoty of applied electrochemical kinetics problems was created at the department. Under the direction of L.I. Antropov the following scientific trends were developing: the theory of corrosion, metals hydrogenation during corrosion, the development and synthesis of corrosion inhibitors, mechanism of organic and inorganic inhibitors action, zero points of metals and their role in the electrode processes kinetics, metals and alloys plating, contact exchange of metals, the electrolyses of melt systems, metal’s electrorefining. The works of the department’s staff was acknowledged among the Ukrainian and foreign electrochemists. More than 30 scientific works and patents were published every year. The Antropov’s textbook “The theoretical electrochemistry” was published 4 times in Russian, Ukrainian, English, French, Chinese, Italian and Hungarian. The author was awarded with the State Award of the USSR.

During many years Antropov was a member of the bureau of scientific and technical council “GKNT” USSR in metal corrosion protection, the head of one of the sections, the member of editorial board of the magazines ("Соrrosion Sсience", "Electrochemistry", "Metal protection"), the member of electrochemical scientific council of the Science Academy of USSR and specialized council. For his many-sided scientific-educational and organizational activity L.I. Antropov was awarded with the order of “Red labour banner” and “The sign of worship”, honory letters of commendation and medals, was awardedwith the atate award of USSR (1975 y.), Honored figure of USSR science (1978 y.), award USSR SA of Pisarjevskiy (1991 y.), became the corresponding member of USSR SA (1982 y.). World electrochemical community names Antropov L.I. among 12 scientists who has founded modern electrochemistry, and his school is one of the leading electrochemical in the world.
The number of students at the department during 1960–1986 years increased to the two groups with different specialization, evening and distant groups were organized. The teachers and the staff of the department were invited to read lectures in India, USA, France, Japan, Cuba, Congo. The department participated in organization of international and republican conferences in the field of corrosion and electrochemistry.

Since 1986 the head of the chair became doctor of engineering, professor V.P.Chviruk. Under his direction new scientific trend was established at the department – the creation of electrochemical gas sensors for detection of microdoses of gases in atmosphere. The amperometric sensors for detection chlorine, hydrogen sulfide, carbon dioxide, ammonia and ozone (O.V. Linucheva, А.І. Kushmyruk, S.V.Nefedov, М.А.Gerasimenko, О.І. Buket, J.М.Zaverach, О.V.Kosogin, L.А. Jatsuk). The principal novelty of this works sustained in determination of the EMF’s nature and it’s calculation method development for the system with matrix proton electrolyte (MPE), in revelation of the effect of ion conductivity air dry oxide electrodes (PhD work of O.V.Linucheva, 1994 y.), in establishment of ability of some catalytically inactive metals in a special potential range to reveal selective properties to the target electrochemical reaction (S.V.Nefedov), in revealing of the role of ion-exchange properties of MPE in electrode reatction kinetics. (А.І. Kushmyruk).

The department glorious traditions, where young people work next to the well-known scientists.