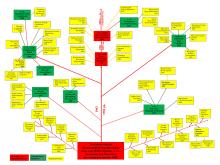 Head of the school: Linyucheva Olga Vladimirovna, Doctor of Technical Sciences, Professor of the Department of Technology of Electrochemical Production KPI. Igor Sikorsky, Head of the Department since 2008, Chairman of the Commission on Science and Innovation of the Academic KPI Council. Igor Sikorsky, Deputy Dean of the Faculty of Chemical Technology for Research (1999 to present), member of the expert council of the Higher Attestation Commission of Ukraine, member of the Specialized Academic Council for the defense of doctoral and candidate dissertations of KPI. Igor Sikorsky, National Secretary of Ukraine in the International Electrochemical Society (ISE) for two terms (2010-2015 and 2019 - until 2023), member of the Ukrainian Association of Corrosionists, member of the expert councils of NTUU "KPI", project expert on research state programs, member of the editorial board member of the editorial boards of professional publications: "Scientific News of NTUU" KPI "," Sensor Electronics and Microelectronic Technologies "," Water and Water Treatment "Professor OV Linyucheva is a student and follower of LI Antropov and VP Chviruk , and scientists and teachers of the Department of Technology of Electrochemical Production support the authority of electrochemists KPI named after Igor Sikorsky at a high professional level. "Scientific School of Electrochemical Kinetics named after LI Antropov" has received worldwide recognition, two most famous electrochemists Bokris and Conway in review, dedicated of Electrochemistry, included LI Antropov in the number of twelve scientists who created the foundation of electrochemistry, and the Kyiv Electrochemical School founded by him - to the most authoritative in the world.

Founder of the school and year of foundation: "Scientific School of Electrochemical Kinetics. LA Antropova "was founded in 1962 at the Faculty of Chemical Technology by Lev Ivanovich Antropov, Corresponding Member of the Academy of Sciences of the USSR, Doctor of Chemical Sciences, Laureate of the State Prize of the USSR, Honored Scientist of the USSR, Head of the Department of Electrochemical Production (1962-1986). ) - the founder of the modern electrochemical school. Antropov LI - was the author of fundamental developments on the structure of the electric double layer and the kinetics of electrode processes, electrochemistry of organic compounds and electrocatalysis, corrosion and protection of metals, the given φ-scale of potentials. His many years of experience in scientific and pedagogical work are summarized in the textbook "Theoretical Electrochemistry", which was published four times in Russian (1965, 1969, 1975, 1984), twice - in English, as well as French, Chinese, Hungarian, and in 1993 - Ukrainian languages ​​and is now the main textbook for universities in Ukraine and around the world. For this textbook LI Antropov was awarded the State Prize of the USSR in the field of science and technology (1975). LI Antropov was the Chairman of the section "Metal Corrosion Inhibitors" of the USSR State Committee for Scientific Research, a member of the editorial board of the journals "Corrosion Science", "Electrochemistry", "Protection of Metals"; gave lectures at universities and research centers in England, France, Italy, USA, founded the Department of Electrochemistry at the Bombay University of Technology (India).

From 1986 to 2007 it was the period of foundation of a new direction of the scientific school of electrochemical kinetics, namely, electrochemistry of solid-state systems with proton and matrix electrolytes and frame catalytically active gas diffusion electrodes. This direction was initiated by the first graduate student LI Antropova, Honored Worker of Science and Technology of Ukraine, Head of the Department (1986 - 2008), Doctor of Technical Sciences, Professor Volodymyr Petrovich Chviruk. The result of this direction was the creation of gas sensors for air monitoring. These sensors are technically superior to the best models of leading foreign companies. For this development Chviruk VP with the team of scientists of the department was awarded the State Prize of Ukraine in the field of science and technology (2002). Under the leadership of VP Chviruk, a series of amperometric sensors for the determination of chlorine, hydrogen, hydrogen sulfide, carbon monoxide, hydrogen chloride and ozone was developed. The principal novelty of these works was to identify the nature of EMF and develop a method for its calculation for systems with solid proton electrolytes (TPE), to identify the effect of ionic conductivity of air-dry oxide electrodes, to establish the ability of catalytically inactive metals in a range of reactive potentials. in identifying the role of ion exchange properties of TPE in the kinetics of electrode reactions.

From 2008 to the present - this is the period of creation of the direction of ecological electrochemistry, corrosion-electrochemical environmental monitoring, corrosion theory of micro- and nanostructured materials in electrochemical systems of sensors and supercapacitors, which was initiated and developed by Professor, Doctor of Technical Sciences, Head of Department Olga Vladimirovna Linyucheva. Scientists of the school under the leadership of OV Linyucheva created a unified series of gas sensors of a new generation, developed miniature electrochemical sensors and sensor systems for determining oxygen in environments of natural and man-made origin, the latest devices for determining the content of sulfur dioxide in air and process gaseous medium. microfluidic hydrogen sulfide for monitoring and prevention of air pollution, proclaimed the scientific basis of mediator electrocatalysis for sensor systems and supercapacitors of sensor systems, determined the role of mass transfer processes in open electrochemical systems of gas sensors, created electrochemical modules in generators and gas. On their basis, portable and stationary gas analyzers and multi-channel gas analytical systems, including with sensor units for remote diagnostics, which have no analogues in the world, have been created and implemented in various industries and utilities.

Scientists of the modern scientific school of electrochemical kinetics named after LI Antropova developed a complex physical and chemical inhibition of corrosion processes and increase the efficiency of heat transfer in the aquatic environment for energy conservation of Ukraine, corrosion protection of structural steels in water with a high content of gas and solid fuel combustion in heat generators -measuring equipment (Prof., Doctor of Technical Sciences YS Gerasimenko); created new highly effective industrial inhibitors of metal corrosion, improved environmentally friendly chemical sources that do not contain mercury compounds, established their industrial production (Prof., Ph.D. IS Pogrebov); developed chemical power sources (Prof., Dr. Tkalenko); the theory of formation of conversion coatings and methods of evaluation of their protective action in the conditions of atmospheric corrosion was developed, the algorithm of electrochemical formation of protective phase layers on the surface of corroding metal with the participation of components of corrosive environments M.I. Donchenko and Prof., Doctor of Technical Sciences Linyucheva OV); A new section in the theory of corrosion of metals, namely, corrosion of micro- and nanostructured materials in electrochemical sensors and the basic laws of electrochemical processes of formation of ordered nanosized and microlevel materials of chemotronics (Prof., Doctor of Technical Sciences OV Linyucheva).
Well-known representatives of the "Scientific School of Electrochemical Kinetics. LI Antropov ": Laureate of the Lenin and State Prizes of the USSR, prof. L.M. Якименко; Academician of the NAS of Ukraine OV Horodysky; Corresponding Member NAS of Ukraine OG Zarubytsky, member cor. NAS of Ukraine VI Shapoval, Rector of the University VS Ivanov, professors of the department VP Chviruk, Yu.S. Герасименко, Д.А. Tkalenko, MI Донченко, О.В. Linyucheva, IS Pogrebova.

The main scientific directions of the school:

Execution of research (for the last 10 years):

There is a specialized scientific council for the defense of doctoral and candidate dissertations: D 26.002.13, specialties 05.17.03 - Technical electrochemistry; 05.17.14 - Chemical resistance of materials and corrosion protection.

Among the graduates of the department are 2 academicians, 3 corresponding members of the NAS of Ukraine, 26 doctors and 118 candidates of sciences.
For the last 10 years 2 doctoral and 7 candidate dissertations have been defended.

The main achievements of the school staff (for the last 10 years):

Cooperation with enterprises and research institutes of Ukraine:

The main bases of engineering and technological practice:

Research institutes of the NAS of Ukraine: